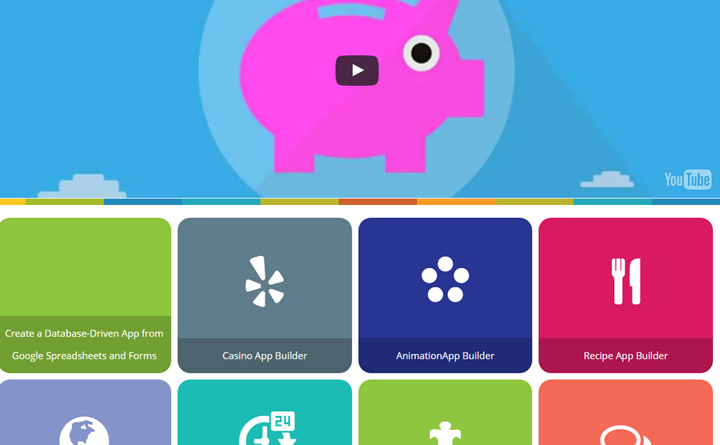 As the world becomes more digital, more people are creating apps to make accessing their services, products, blogs or businesses easier. However, creating an app is no easy task. The time and money investment puts many off. There is some good news for people looking to create apps and do not have the resources to invest. There are many mobile platforms available that make it possible to build an app on a budget, quickly, easily and with no coding knowledge needed.

Using these platforms it is possible to create applications and start reaping the benefits of offering your customers a dedicated mobile experience, increased awareness, engagement and revenue.

Here are some of those mobile platforms

This is a cloud based mobile app builder. One can use it to create apps for android, IOS, and windows phone and include Apache Cordova with access to its built in contents. There is nothing to install or download since the builder is available in the cloud. It is easy to get started on it quickly. It has a visual editor that utilizes drag and drop components to build the UI. It is also possible to connect to any REST API and use it in the app. One can also instantly build a cloud database and backend the app if there is a need of storing data. More powerful functionality can also be added using the appery plug in catalogue. Alternatively one can custom make their own private plug ins to use in the app. One can also collaborate with other development teams, business users and customers allowing you to share your mobile app real time. The app is usually free at the start then rises to 180 dollars for the premium.

This app creator allows users to create and manage their own android and IOS apps. This platform supports all types of media with automatic importing of RSS, twitter or Google News words. It also has an auto refreshing feature that allows users to chat in real time. To accurately preview the app, one can use the free mobile roadie connect app. The app also guides one during the submission process and mobile roadie checks the quality and appropriateness of the content. The user can also push content straight from the app to other social media pages and blogs. Considering the fact that the API is language agnostic one can pull data in a variety of formats ranging from XML, HTML, JSON, PHP and CSV. When building the app one can customize it to create a feel that applies to all platforms. Its pricing starts at 125 dollars per month for the core version and goes up to 667 for the pro version.

Appbuilder has two different approaches available and provides a suite of apps to suit clients, employees, events and brochures. To build the app one can use the online toolkit or the Appbuilder itself will work with you to build the apps structure and populate it with initial content. With the help of a dedicated app library one can provide users with a window into multiple apps and customize it with ones branding of choice. It is possible to protect public and private apps with user names and passwords and distribute them via the relevant app store. Appbuilder also allows the creator to make numerous updates even after the app goes live. The updates made go live within 60 seconds of making changes. Its pricing is available upon request.

This platform has nine colorful and highly customizable design templates to allow one to get started. Together with iPhone and android apps one can have a free mobile version that users can access from their phones. this app builder allows one to link a domain name if one intends on making it the official mobile site for their website. It allows push notifications and can convert readers into contributors by letting them submit articles photos and videos. The pricing starts at 16 dollars per month up to 32 dollars for the full plan.

It is a cloud based DIY mobile app creation tool that allows users with zero programming skills to build apps for android, IOS and windows mobile. There is no downloading or installation needed. One just drags and drops the pages needed to create the app online. After completion one receives a HTML-5 based hybrid app that works with all platforms. All app revisions are made real time. It also allows for the integration of social media feeds, blogs, websites and more. Its appointment scheduler works for salons, doctors’ offices, and spas with contact features such as one touch call. The pricing is usually free then rises to 33 dollars per month for platinum.

This platform allows one to build native apps for both IOS and android devices. Utilizing the drag and drop features, one is able to create different building blocks that also allow one to link the app to social media pages. One can also customize the app with styles that suit them and choose their own navigation paths, colors, fonts and icons. It has a one-time fee only of 499 which goes up to 899dollars.

It allows creation and publication of games available for IOS and android. The platform has a scene and act editor where one creates actors in the scene and creates their attributes, images, sounds and actor navigation. Gamesalad has teamed up with Amazon to provide different development options specifically optimized for the Kindle functions. Pricing is initially free then goes up to 299 dollars for pro.

This platform helps create apps for businesses. BiznessApps has a wealth of features that includes, food ordering, shopping cart, loyalty points, push notifications, comprehensive analytics amongst others. Its management system is easy to use making it possible to create an app in minutes customize one’s own designs. It also allows for instant app updates online without going through a lengthy update process. Pricing starts at 29 dollars a month to 59 dollars for the mobile app.

It is a DIY creation platform that lets one create apps for IOS and android amongst others. Founded in the year 2009, it was acquired by Infinite Monkeys to form one of the largest DIY app creating platforms. It is possible to use it to make as many apps as possible utilizing a bunch of features ranging from push notifications, audio and video steaming, chat rooms and google maps amongst others. The apps can be tracked via the dashboard allowing easy customization of the apps looks and functionality. Pricing starts at free going all the way to 99 dollars for a one-time fee.

It is a builder with complete content management, user engagement tools and monetization options. This platform has a variety of customization options allowing for the integration of the built app to different social media sites. The monetization option of the app means creating a revenue stream for the app with an ecommerce experience. Apps created can be published to both IOS and google play. The pricing starts at 19.90 dollars per month to 119.90 dollars per month for unlimited.